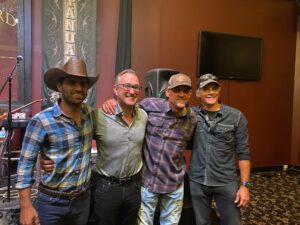 Daniel started Sheridan Road Financial in 2003. Philanthropy and giving back was always important to him, so while running the company, Daniel inspired his employees to participate in many community outreach programs and volunteer in ways they found impactful.

Successful weekend volunteering events throughout the years led Daniel to the idea that he could help community organizations and other non-profits not only by donating time, but financially as well, through fundraisers and special events.

The launch of the Sheridan Road Charitable Foundation coincided with the hands-on philanthropy program that was already established at Sheridan Road Financial. The slogan “Sheridan Road: Driving Change” became a way of life its employees.

Giving back while having fun was nothing new to Daniel.  When he was in his 20’s living in Chicago, he started Chicago Street Project which ultimately became Chicago Cares. This was an organic endeavor starting from the ground up where Daniel hosted special events in the city where other young professionals would come for the party but also to donate their time and money to worthy causes.

Chicago Street Project gave back to these non-profits with the goal being to help as many people as possible that they could. Young leaders from other cities who wanted to replicate this model reached out to Daniel and he helped them execute their own satellite street projects in cities such as Los Angeles, San Francisco, Denver and Toronto.

The success of these street projects in other cities lead to one of the visions of the Foundation; to evaluate what works well on a local level and then to help those organizations implement similar models in other communities that would benefit the same way.

After working in Nashville in the early to mid 2000s, Daniel decided to move there part-time. Since Daniel is an avid country music fan, he got to know some people in the music industry and came up with the idea to do a fundraiser called “Songwriters-in-the-Round” with some award-winning country music writers.

Over the years, the Foundation put on many of these events in Nashville, Denver and Chicago. They are successful because it is such a unique evening – seating is limited to about 50 people, making it an intimate atmosphere where the songwriters tell stories, discuss their creative process and give a special concert. The full sit-down dinner is usually accompanied by a silent auction to raise more money.

The success of the Songwriters-in-the-Round events is something that distinguishes Sheridan Road Charitable Foundation among other foundations.

Daniel also is an ardent art collector, and his passion for art and music is something that he knows can enhance young people’s lives, so it is important to him to give back to organizations who also value the arts.

Daniel also wrote a book called the Financial Wellness Mandate in 2020. A main theme is that young people have stress and anxiety over their lack of control of their finances. Most young people have no savings and never had any financial literacy classes in high school.

Financial wellness plays a major role in overall mental health and happiness, so the Foundation ultimately developed a mission that helps people in under-resourced communities benefit from a good education, quality community programs, and overall mental, physical, and financial health.